Read e-book Taking Back Our Lives: A Call to Action for the Feminist Movement

Socialist Feminism: A Strategy for the Women's Movement 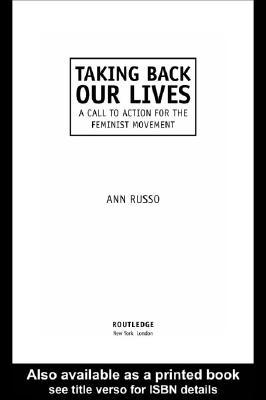 James A. Feminist Rhetorical Resilience. Elizabeth A Flynn. Beyond the Closet. A Radical Rethinking of Sexuality and Schooling. Eric Rofes. No More Secrets. Janice Ristock. Rethinking Sexual Identity in Education. Susan Birden. The Radical Women's Press of the s. Cherise Kramarae. Gail Dines. Feminist Accountability. Ann Russo. How to write a great review. The review must be at least 50 characters long. The title should be at least 4 characters long. Your display name should be at least 2 characters long. At Kobo, we try to ensure that published reviews do not contain rude or profane language, spoilers, or any of our reviewer's personal information.

You submitted the following rating and review. We'll publish them on our site once we've reviewed them. Continue shopping.

A Herstory of the #BlackLivesMatter Movement by Alicia Garza

Item s unavailable for purchase. Please review your cart. You can remove the unavailable item s now or we'll automatically remove it at Checkout. More Videos The year feminism fought back Beginning with the inauguration of Donald Trump, the year saw an escalation of the Republican Party's attacks on women, including efforts to defund Planned Parenthood, undermine women's legal and reproductive rights and slash essential health benefits. Marianne Schnall.

There were also threats to issues women care about: protections for children, civil rights and the environment, just to name a few. And then came the explosive epidemic of reports of sexual harassment and assault, exposing just how pervasive this problem is for women in all sectors of society. With all that has happened, it's been hard for many women -- and men -- not to feel overwhelmed and discouraged. In response to these attempts to diminish our power and silence our voices, women are harnessing their outrage.

They are more engaged, energized and resolute than ever. Issues that were long ignored are finally coming to the surface, and women are beginning to speak up and use their voices and influence to demand real change. As New York Sen. Kirsten Gillibrand, founder of Off the Sidelines , put it to me: "One of the only silver linings of the Trump presidency is that more and more women are feeling emboldened to raise their voices and fight for the issues that matter most to them, from sexual harassment in the workplace to paid leave.

We saw that with the Women's March, and we saw it again on Election Day last month, when women all over the country got off the sidelines, ran for office, and won. This fire now burning in women explains why, even after such a rough year, we have reason to hope.

I'd like to offer these reasons to be optimistic about what has in store -- to remind us that we are living in a watershed moment in our history, one we can broaden and deepen. A transformative moment. Rose McGowan: 'I have been slut-shamed' Women everywhere are rising up, taking the women's movement into the mainstream. Women are protesting, marching, organizing and building power.

From the millions who joined the Women's March to the survivors who have bravely come forward with their stories of sexual harassment and assault, to the millions participating in the MeToo movement, it's become clear that women are not going to stay silent anymore. And these "silence breakers" -- named as Time magazine's "Person of the Year" -- are not only speaking out, but are being heard. The "women's movement" has been swept into the mainstream and become more diverse, and social media has become increasingly effective at mobilizing younger generations of women and girls.

At the same time, men are becoming more vocal and aware of gender issues and finding ways to be active as allies. And, this week, the word "feminism" was named as Merriam-Webster's word of the year: It was the year's most-searched word on the dictionary's website. Harvey Weinstein is a symptom, but what is the deeper problem? As California Congresswoman Maxine Waters, who has been one of the most outspoken advocates of this new "resistance" told me, "When I spoke at the historic Women's March in January, I was extremely inspired and encouraged.

Following the election of Donald Trump -- a man who had defined himself as having no respect for women and who was prepared to use his office to turn back the clock on the progress that had been achieved by the women's movement, the civil rights movement, and the LGBTQ movement -- a very diverse group of women organized the Women's March, which brought together thousands of women from all ages, ethnicities, religions, and walks of life, who showed up and gained the type of attention for our concerns that we haven't seen in many years.